The Queen has long loved her Corgi dogs. Did you know they even have their own specially prepared dishes and meals by inhouse chefs at the palace? They officially have a royal menu! Apparently, a Mrs Fennick, who took care of the dogs at Sandringham would send their menu through to the kitchen every month listing a daily diet for each dog. Menus have been known to included beef, lamb chicken and rabbit.

The monarch’s love of the breed started as a teenager, when she fell in love with her father’s dog Dookie. She was given a corgi called Susan for her 18th birthday and during her reign she has since owned more than 30 corgis, many of them direct descendants of her first dog. Sadly, the last of the Queen’s corgis died in 2018, ending her 74-year connection with the breed. Her Majesty still has two Dorgis (corgi-dachshund crosses) but her late dog Willow was the last pet with a link to the Queen’s original family of royal corgis.

We LOVE Dachshunds at K9 Organics as you know! Pepe our Canine Executive officer and official man of the house is a Miniature Dapple Chocolate brown Dachshund and he found the royal menu quite interesting when we shared this news with him! Pepe also has his very own “Royal Menu” as we cook for him with organic fish, vegetables and fruits to manage his allergies and keep him in excellent health and condition.

He also has a favourite K9 Organics shampoo to keep his coat in tip top condition. He is particularly fond of the English Lavender as it keeps him smelling beautiful with it's subtle calming organic scents and ingredients.

Keep your eyes out for a new film called “The Queens Corgi’s” released in cinemas this July – a family animated adventure inspired by the Queen’s love for the noble breed and guaranteed to be an enjoyable watch for all dog lovers children and adults alike.

The “Best of the Best” Natural Calming Aids for Dogs!

How We are Getting Addicted to K9 Organics 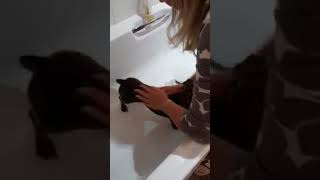